Seefin Ltd. and the Caragh Bridge Angling Club reached an agreement at the Killarney Circuit court on Wednesday February 6th 2008 on the future management and development of the Caragh Fishery. Both parties agreed angling codes which were to ensure the future wellbeing of the Fishery and also agreed to ensure that the agreement is fostered in a continuing spirit of mutual respect and cooperation.

The Caragh Bridge Angling Club (hereafter referred to as the CBAC) was established at an inaugural meeting on the 6th Dec 1998 at the home of local man Raymond O’Neill who was elected Chairman on the night. Another local man John Reidy was elected Vice-Chairman and Graham Clifford was elected Secretary/Treasurer. Three committee members were also elected on the night, namely:- Jim O’Neill, Sean O’Connor and Gerard Kelly.

The above mentioned meeting ensued from a gigantic public meeting which took place at The Manor Inn Killorglin on a Sunday afternoon 25thOctober 1998 attended by all Kerry politicians and local Councillors. At this meeting an action committee of six was elected namely:- Jim O’Neill, Raymond O’Neill, Sean O’Connor, John Reidy , Mary Reidy and Joe Sweeney.

The reason for the aforementioned court case on Feb.6th 2008 was that Seefin claimed that they had exclusive fishing rights of the Caragh river which was strongly disputed by local people.

This all started in 1997 when Seefin Ltd supposedly bought the fishing rights with government funding and their stated intention then was to develop the Fishery for the “discerning specialist tourist angler.”

The development was to remove rocks from the river and create twenty five holding pools. Allegedly

A sum of £200.000 (Irish punts) in grant aid was awarded to Seefin Ltd to carry out this work on the river.

However some local people had serious doubts concerning the legality of Seefin’s exclusive ownership of the fishing rights and local people who had no interest in fishing were also concerned at the idea of heavy machinery arriving, digging and changing this beautiful natural resource.

With regard to the “exclusive fishing rights” it was arranged that four members of the action committee visit Dail Eireann. This they did and they were met by the Minister for the Marine & Fisheries, Dr. Michael Woods which resulted in 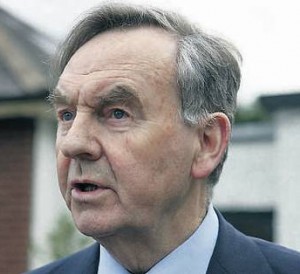 more research being carried out. The said research could not find solid title to the Fishery and the aforementioned grant to Seefin was then rescinded.

Eventually a date was set for the court case against the four sued members but unfortunately both John & Mary Reidy died before that set date. That then left Jim O’Neill and John Mulvihill solely responsible, they were then the only two people being sued by Seefin on behalf of the club.

The cost of the pending court case was a matter of great concern and a special fund was set up to raise capital to cover this. Local people and businesses rallied ’round to help raise funds towards the cost of the case. The total legal costs amounted to €53,719-24

On the said court day proceedings were avoided between Seefin and the CBAC. Negotiations went on until 10pm that evening when an agreement was eventually reached and signed.

The agreement was signed by four members on behalf of the club ie:- Raymond O’Neill, Jim O’Neill, John Mulvihill and Gerard Murphy.